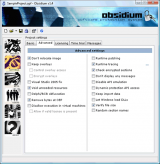 Obsidium is a feature rich professional program licensing and protection system that was developed as a cost effective and simple to implement, yet trustworthy and non-invasive way to secure your 32- and 64-bit Microsoft Windows software applications and games from reverse engineering, unapproved modifications (cracking) and redistribution (software piracy) while offering a safe and flexible licensing and registration system.

It is generally aimed at software companies and single developers who would like to offer feature- or time-limited evaluation variants of their software products, but also enables for the implementation of a large range of custom licensing scenarios.

Code Virtualization enables you to transform particular parts of your program's code in order to make them tougher to reverse engineer, modify or understand. Native machine code will be transformed into functionally similar byte code for a virtual CPU that is interpreted during runtime.

Encryption, obfuscation and compression of application code and data

In order to avoid disassemble and static examination or modification of your program file on hard disk, your application's code and information will be encrypted using a powerful and fast cipher (AES) and its integrity confirmed. Also, you may select to compress your program which will commonly lower the size of the executable by more than 50 percent.

Essential parts of your code can be encrypted particularly, offering additional protection against modifications while the software is working.

Obsidium has been tested by Download82.com team against viruses, spyware, adware, trojan, backdoors and was found to be 100% clean. Our editors will recheck this software periodically to assure that it remains clean.