A powerful and reliable DHCP server 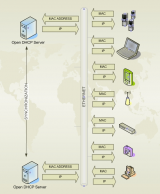 Open DHCP Server is a comprehensive and reliable DHCP server which respects all the industry standards. The utility comes with support for several subnets and multiple domains.

Open DHCP Server consist of two instances in order to offer protection if the first DHCP server does not work properly. If the server fails, the other instance will continue to renew leases. Both servers are synchronized via a database.

Open DHCP Server is low on CPU load and will ensure that both databases are mirrored in order to avoid duplicate leases.The user interface is clutter-free and can be easily configured according to your needs. You can also configure DHCP ranges to allocate the proper IPs when new leases are needed.

Open DHCP Server has been tested by Download82.com team against viruses, spyware, adware, trojan, backdoors and was found to be 100% clean. Our editors will recheck this software periodically to assure that it remains clean.