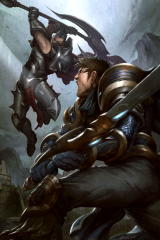 League of Legends is a popular and competitive online game in which two groups of strong champions are leading a war across several game modes and battlefields. League of Legends can be played by users of every skill level.

League of Legends has one of the World's largest online gaming communities, giving you the possibility to form teams and fight against opponents from other countries, make friends and exchange impressions and stats on social networks and forums.

League of Legends has been tested by Download82.com team against viruses, spyware, adware, trojan, backdoors and was found to be 100% clean. Our editors will recheck this software periodically to assure that it remains clean.