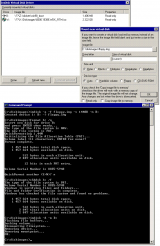 It can make virtual hard drive, floppy or CD and DVD drives using image files or system memory. The install suite installs a console-mode control software called imdisk.exe and a Control Panel applet. After install is done, type imdisk without the parameters for syntax help or click on the ImDisk icon in the Control Panel. The program also adds a menu item in Microsoft Windows Explorer so that you can right click on a file to mount it like a virtual disk drive. Users of mdconfig in FreeBSD will likely be familiar with the command line syntax of imdisk.exe. The driver, control and service software can be uninstalled using the Add and Remove programs applet in the Control Panel. No reboot is needed for uninstalling or installing.

A supplementary driver, assign, in this install package is compatible with memory assigning over 4 GB limit on 32 bit Microsoft Windows through address window extension, AWE.

The ImDisk driver is compatible with forwarding I/O demands to third-party image file types handlers or to services on other PCs on the network. This makes it likely to boot a PC with NTFS partitions with a Live-CD and use the contained devio tool to let ImDisk on another PC using Microsoft Windows on the network mount the NTFS on the PC with a broken NTFS partition. This way you can restore data and even run chkdsk on drives on PC where Microsoft Windows doesn't boot.

ImDisk Virtual Disk Driver has been tested by Download82.com team against viruses, spyware, adware, trojan, backdoors and was found to be 100% clean. Our editors will recheck this software periodically to assure that it remains clean.