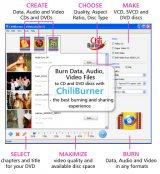 Movavi ChiliBurner is an advanced and feature-packed application which enables you to effortlessly create, backup, and copy a wide variety of disc types, including CDs, DVDs, SVCDs, and VCDs. The program lets you copy and backup unprotected discs with just a few mouse clicks.

Movavi ChiliBurner allows you to create any type of CD or DVD discs, such as Audio CDs, data discs, video DVDs, and much more. You can create Audio CDs from all your audio files, such as WAV, WMA, or MP3 files.

Movavi ChiliBurner lets you burn DVDs, SVCDs, and VCDs in a broad range of popular formats, including MPEG, WMV, AVI, MOV, ASF, and many others. You have the possibility to add titles, animated menus, and chapters to your DVD discs.

Movavi ChiliBurner allows you to easily add new files just by using the Drag&Drop method. You can also edit and preview your videos before starting the burning process.

Movavi ChiliBurner lets you backup your DVD and VCD disks to your hard drive. You can burn the saved files to disc later.

Movavi ChiliBurner will help you create great-looking menus for your DVDs in order to customize your discs. The utility allows you to add your own soundtrack and customize the menu layout according to your wishes. Several themes for your DVD menus can be downloaded for free after the program installation.

ChiliBurner has been tested by Download82.com team against viruses, spyware, adware, trojan, backdoors and was found to be 100% clean. Our editors will recheck this software periodically to assure that it remains clean.