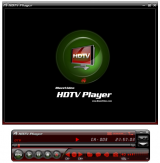 BlazeVideo HDTV Player is a feature-packed and powerful application which enables you to view, record, replay or pause live TV programs on your computer. The program also lets you listen digital FM Radio Stations directly on your PC. The program is able to support a wide variety of analog and digital television standards, including DVB-S, DVB-T, DMB-TH, DVB-S2, ISDB-T, CMMB, ATSC, NTSC, PAL, SECAM, and many others.

BlazeVideo HDTV Player can be also used as a multi-media center, allowing you to play CVD, DVD, SVCD and other popular media files. The program lets you easily turn your computer into a TV if you have a TV Tuner installed. The application is very easy to install, configure and use.

BlazeVideo HDTV Player lets you record Radio Stations and Live TV programs. You can record your favorite shows with only one click and store them on your local drive for later viewing. Moreover, you can convert the recorder files to various formats using the integrated video converter utility. Scheduled recording is possible as well.

BlazeVideo HDTV Player lets you convert the recorded TV shows for playing them on various portable devices, such as iPod, iPad, iPhone, Sony PSP, BlackBerry, Samsung, HTC, and many others. You can convert the videos to various formats, including ASF, AVI, MP4 and 3GP.

BlazeVideo HDTV player has been tested by Download82.com team against viruses, spyware, adware, trojan, backdoors and was found to be 100% clean. Our editors will recheck this software periodically to assure that it remains clean.