A rich and advanced plotting library for programmers and scientists 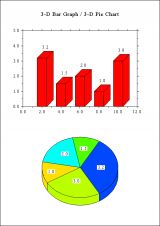 DISLIN is a comprehensive and advanced library which provides a series of functions and subroutines for displaying data graphically. The program is mainly aimed at scientists and programmers. The application does not require advanced knowledge of hardware features.

DISLIN for Lahey LF95 has been tested by Download82.com team against viruses, spyware, adware, trojan, backdoors and was found to be 100% clean. Our editors will recheck this software periodically to assure that it remains clean.